Not everyone wants four doors on their Honda Civic, so the arrival of the 2017 Honda Civic Coupe should excite them and you.

It’s aggressive and stylish. It’s sleek and clean. It’s a force to reckon with as it smoothly powers its way through sweeping highway curves and city traffic.

Honda is giving sports car enthusiasts their due with the coupe. From nose to tail, it exudes performance. Even the shark fin antenna on the Touring model adds to its overall aggressive appearance.

The rakish front end offers a narrow nose that sweeps back into tightly focused LED headlamps. Muscular lines roll over the front wheels and down the sides where they culminate into an LED display of tail lamps and an integrated rear spoiler.

Body coloured bumpers help to solidify its appearance and body coloured door handles, except in the LX model where they are chrome, add smooth and uninterrupted lines along the surface. The heated side mirrors are also body-coloured.

It is available with 16-inch or 17-inch aluminum wheels, depending on which model you choose, and for those who are stargazers, an available moonroof opens up and lets the light into the cabin.

The Civic Coupe is available in seven dramatic colours including a wildly, vivid Energy Green Pearl. 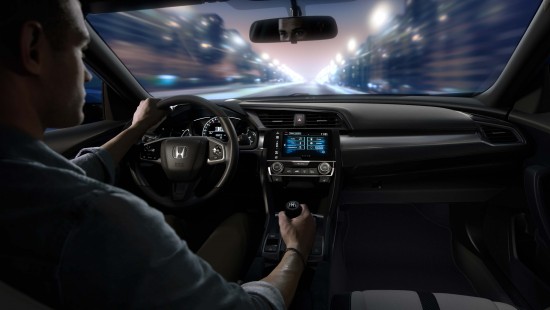 Appearances aside, let’s talk about what’s under that sloping hood.

First, there is the 2.0-litre 16 valve DOHC i-VTEC® 4-cylinder engine in the base LX model. You get 158 horses at 6,500 RPMs from this engine. You can choose between a 6-speed manual or continuously variable automatic transmission.

Here is where it gets, well, exciting.

Honda dropped a 1.5-litre 16 valve, direct injection DOHC 4-cylinder turbo under the hood of the EX-T and Touring models. That’s a 174 horsepower engine at 6,000 RPMs ready to grab the highway and put everything else in your rearview mirror.

If you love the feel of the shifter under your hand as you grab gears on the go, then you are going to love the fact that Honda gives you the opportunity by making the 6-speed manual transmission in the EX-T model standard equipment.  There is nothing more exciting than putting the Civic Coupe turbo through its paces by fully controlling the RPMs.

Of course, for those who prefer the automatic, it is available in the EX-T and standard in the Touring models.

As you would expect, the interior is comfortable and designed for those who love to drive. The front bucket seats are heated and available with leather trim for a classic look of luxury.

With an available leather-wrapped steering wheel with embedded controls, your sights stay focused on the road ahead while your hands remain comfortable and fatigue-free.

The rear seat has a 60/40 folding configuration that allows you access to the trunk for transporting bulky items. Your rear passengers will stay comfortable with 912mm of legroom and 876mm in headroom in the EX-T and Touring models.  The LX model offers 3mm more headroom in the backseat.

The Civic Coupe offers the latest technology when it comes to the infotainment system and the safety features.  Like all Hondas, the safety team worked hard to integrate the best systems for your safety and others.  The 2017 Civic wins autoTRADER’s Overall Top Pick award and the Kelley Blue Book Overall Best Buy award, so the coupe comes from a fine lineage.

Honda added a hatchback to the 2017 lineup, and there are two new packages planned for this year.

Stop by and put it through its paces today.