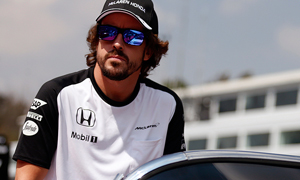 Fernando’s participation in this year’s Indy500, one of the Triple Crown of motorsport [the Monaco Grand Prix, the Indy500 and the Le Mans 24 Hours], is a fantastic opportunity for all those involved, and it realises a dream Fernando has had to compete in other legendary motorsport events around the world.

Fernando will race for McLaren-Honda-Andretti team with Honda powered 2.2-litre twin-turbo V6, limited by IndyCar regulations to 12,000rpm.
The car will be run by the Andretti Autosport team, headed by founder, owner and Chief Executive Officer Michael Andretti, a former IndyCar champion who raced in Formula 1 for McLaren. Fernando will also be a team mate of Takuma Sato, a former F1 driver who joined Andretti Autosport from 2017 season.
Andretti Autosport will be racing in Indy500 with 6 cars with Honda engine, including Fernando’s McLaren-Honda-Andretti.

In due course McLaren-Honda will announce the identity of the driver who will race Fernando’s car at Monaco.