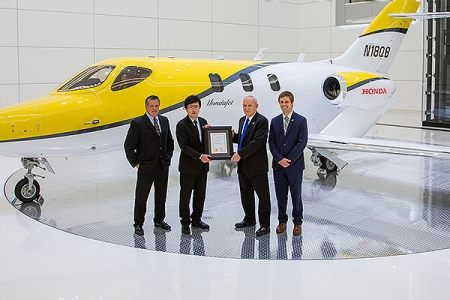 Honda Aircraft Company announced today that the HondaJet, the world’s most advanced light jet, received its type certificate from Transport Canada on June 1, 2017. The approval paves the way for the company to begin deliveries to Canadian registration customers as HondaJet production continues ramping up.

“We are proud to achieve Canadian certification for the HondaJet, which signifies it meets the high safety standards governed by Transport Canada,”said Honda Aircraft Company President and CEO Michimasa Fujino. “With multiple orders in the pipeline, achieving this important milestone will now allow us to begin HondaJet deliveries to our Canadian registration customers.”

“Honda has a strong reputation in Canada. The HondaJet, with its high performance and superior fuel efficiency, further builds on that positive brand image,”said Marshall Myles, Chairman and CEO for Skyservice. “We are proud to represent the HondaJet in Canada.”