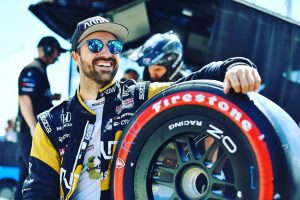 You can excuse James Hinchcliffe for speeding along Lake Shore Boulevard and up Ontario Drive en route to a media appearance Monday to promote the upcoming Honda Indy Toronto.

Hinchcliffe is just super stoked for next month’s Verizon IndyCar Series race and any chance the 30-year-old from Oakville, Ont., gets to zip around parts of his hometown street course he can’t pass up.

The Honda Indy Toronto is Hinchcliffe’s “Christmas in July,” but for now he’s waiting (im)patiently through “Advent” and settling for those brief, blazing moments he gets behind the wheel of a sick Honda Civic Type R.

“I look forward to it every year, but every year when I come here for this day it just gets me that much more amped,” Hinchcliffe told Sportsnet. “You’re on the grounds, you see the walls go up and even just doing those two corners in this thing, I’m like, ‘Ah man, I want it to be tomorrow.’”

A lifelong gearhead, Hinchcliffe has attended the Toronto race since he was cruising in a different type of four-wheel mode of transportation as a toddler in a stroller. Meeting his idol Greg Moore stands out as his most cherished moment as a fan, but that’s just one of many Hinchcliffe can recall vividly.

“Honestly my earliest memory is my best friend at the time and me using all of the bars underneath the grandstands as like a jungle gym,” Hinchcliffe said with a laugh. “I was always very fascinated with the cars and all the rest of it, but in between sessions we’d just go horsing around in there and normally got in trouble for it. I remember chasing Mario Andretti through the Enercare Centre, or whatever it was called back then, trying to get his autograph and chasing him on his scooter.

Read the rest of the interview on the SportsNet website