Richmond Hill Honda | Civic | The 2017 Honda Civic: Honda’s Best Seller is back with a Familiar Story

The 2017 Honda Civic: Honda’s Best Seller is back with a Familiar Story

For 19 consecutive years, the Honda Civic has been the number one choice in passenger cars in Canada, and now over two million Civics have been sold.

The Honda Civic is the best-selling vehicle for Honda worldwide, and the Alliston, Ontario, plant is where you will find Civics rolling off the assembly line.

The Civic has been in Canada since 1973, but the 2017 Honda Civic and the 1973 Honda Civic are worlds apart. Today, the Civic is all grown up and no longer a lightweight when it comes to appearance, performance, and passenger capacities.

The 2017 Honda Civic is available in three body styles: hatchback, sedan, and coupe. No matter which body style you choose, it is sporty and fun to drive. They are built with performance in mind, and they are styled to cut through the atmosphere with ease. Aggressive and sleek, these cars turn heads.

Even the sedan with its four doors is styled to appear ready to race. A set of 17-inch aluminium alloy wheels is spoked and confident. These wheels offer bold determination to the overall package and come equipped with all-season tires that grip the road no matter what the conditions.

The sedan comes in a number of trim packages, including a Touring and an Si package. 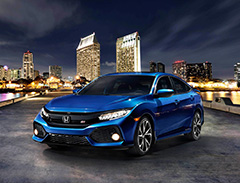 The Touring package for the 2017 Honda Civic sedan offers a full suite of safety equipment and high-tech instruments and entertainment options. It contains all of the features of the EX and adds wireless charging, navigation, leather-trimmed seats, 8-way power adjustable driver’s seat and 4-way adjustable passenger seat, as well as an upgraded stereo system that offers 452-watts and 10 speakers with a subwoofer.

The rear seats are heated, and SiriusXM™ is standard.

In addition, Honda has dropped its 1.5-litre DOHC turbocharged direct injected 4-cylinder into the engine compartment. It is capable of 174 horsepower and powered by a Continuously Variable Transmission (CVT). It offers ECON mode and ECO-Assist in order to get the most from your fuel and a Drive-by-Wire throttle system ™ for responsiveness.

The exterior has its share of upgraded features, as well. Honda put LED headlights with auto shut off on the front of the Civic and chrome door handles on the sides. For safety, the 2017 Civic Touring sedan has mirror-integrated LED turn lamps and rain sensing wipers.

The Si package is all about sport, and it starts with the engine. Honda put their 1.5-litre 16-valve DOHC direct inject 4-cylinder capable of 205 horsepower into this trim package. They coupled it with the 6-speed manual transmission for the driving enthusiast and added a sport mode button. A helical limited slip differential gives you maximum performance in tight hairpin turns. You will like the aluminium trimmed sport pedals under your feet, too.

18-inch aluminium alloy wheels keep you connected to the road, and the rear wing spoiler stops you from taking flight. A centre exhaust finishes the sport look.

You also get all of the safety features you would expect from Honda, including ABS, Brake Assist, and stability features.

The Si package is available for the coupe and the sedan models, so you can enjoy sport no matter how many doors you have.

If you want to drive any of the 2017 Honda Civics, come by and see us. One test drive and you will know why the Civic has been the best-selling passenger car in Canada 19 years in a row.