Tactical Masterstroke Makes It One-Two for Honda at Brno 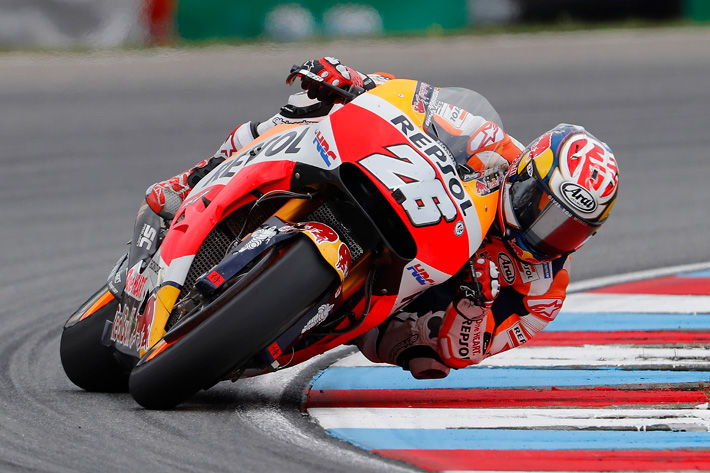 A gamble on tire choice turned into a tactical masterstroke in today’s Czech Grand Prix, as defending World Champion Marc Marquez (Repsol Honda Team RC213V) made an early pit stop to switch bikes after only two laps of the 23-lap race.

The tenth race of 2017 started on a damp track, after Marquez had made a last-minute change to a soft rear rain tire, while everyone else went with the medium. He led away from pole position, but quickly realized he had made the wrong choice. This convinced the 24-year-old Spaniard to make an early pit stop to take his slick-equipped bike before anyone else made the move. His second-guess tactics helped him to win the race by 12 seconds, his biggest MotoGP victory margin in his 32nd success in the class of kings.

Marquez’s decision to switch bikes so early was inspired – by the time all his rivals were also on slicks the three-times MotoGP king had built an unassailable 20-second lead. His progress to his second successive win and his third of the season was deceptively serene – he admitted that the early laps on slicks had been fraught with risk. This latest success increased his championship lead to 14 points over Maverick Vinales (Yamaha), who finished a distant third.

Dani Pedrosa (Repsol Honda Team RC213V) was a little more cautious, changing bikes two laps after his team-mate. But the veteran Honda rider’s pace, which had put him on the front row of the grid for a second race in a row, soon paid off. By lap nine, he was in second place, and was never threatened in his ride to the runner-up spot.

This was the 31-year-old Spaniard’s fifth podium of the season and his 150th across all three categories: MotoGP, 250cc and 125cc. The result also paid dividends for his championship chances, moving him to within nine points of fourth overall in a still-close battle at the top of the table. 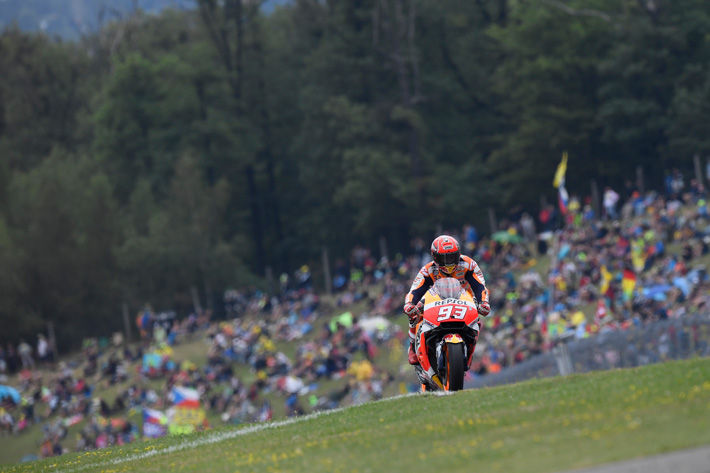 Last year Cal Crutchlow (LCR Honda RC213V) scored a career-first MotoGP victory in similar conditions at Brno. Today the Britain was once again among the front-runners in fifth place, as finished top independent rider. It was another strong ride from the Briton, who lost fourth place on the last lap, by four tenths of the second. It was also a brave ride: Crutchlow suffered back injuries in a heavy crash yesterday after falling on oil spilled by another rider. He was passed fit to race only after hospital scans yesterday evening.

Today’s changeable weather hit the Honda CBR600-powered Moto2 class hardest, with the race red-flagged when rain started falling after seven of the 20 scheduled laps. The race was restarted, over only six laps.

Tire choice again made the difference, with Swiss rider Thomas Luthi (CarXpert Interwetten Kalex) opting for a worn rear rain tire rather than a new tire. He leapt into the lead from the third row of the grid and pulled away to his first win of 2017.

With Miguel Oliveira (Red Bull KTM Ajo KTM) taking third place, it was a difficult afternoon for title-leader Franco Morbidelli (Estrella Galicia 0,0 Marc VDS Kalex). He had been running third in the first outing, but his tire choice for the restart let him down. He dropped down the order to finish eighth, only narrowly holding off Remy Gardner (Tech 3 Racing Tech 3) and Joe Roberts (AGR Team Kalex), in the American’s debut ride.

Luthi’s first win of the year is backed by five second places and two more thirds, his consistent scoring making him a strong title threat. Today he closed to within 17 points of Morbidelli and pulled 32 clear of Marquez.

In the Moto3 race it was back to business as usual for Honda’s NSF250RW brigade, with a ninth race win of 2017, an eighth top-three lock-out and six Hondas in the top ten.

Run over 19 laps on a slowly drying circuit, the first race of the day became closer as the laps wore on. By the finish, it was between championship leader Joan Mir (Leopard Racing Honda NSF250RW) and his closest title rival Romano Fenati (Marinelli Rivacold Snipers Honda NSF250RW). Mir claimed a sixth win of the year, just over three tenths of a second ahead of the Italian, to stretch his impressive title lead to 42 points.

Perhaps the ride of the race came from Aron Canet (Estrella Galicia 0,0 Honda NSF250RW), who finished third after recovering from his involvement in a first-lap tangle. He had dropped to 22nd, but rode steadily through the pack.

The next race is the Austrian Grand Prix at the Red Bull Ring, next weekend.